Making a most welcome arrival into Gladstone Airport during the afternoon and evening on Friday 16 September were a pair of Royal Australian Air Force (RAAF) Lockheed C-130J-30 Hercules transport aircraft. 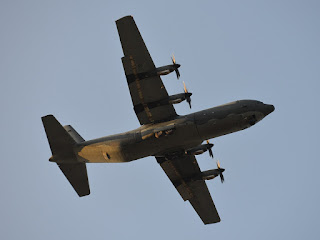 They were identified as A97-467 and A97-468 of the RAAF's No. 37 Squadron medium tactical airlift squadron out of RAAF Base Richmond, in New South Wales.

Both Hercs looked to flying into Gladstone from RAAF Base Williamtown via airwork at the Gold Coast.  In fact, on arrival into Gladstone, A97-467 completed more airwork including an overshoot off Runway 28 at Gladstone, as well as a touch-and-go. 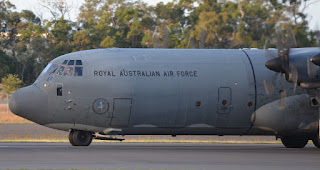 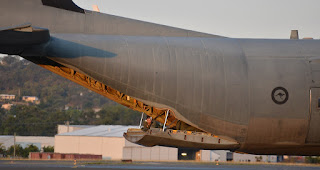 Both Hercs are due to spend the night at Gladstone Airport with (I'm told) a busy day of 'community engagement' on Saturday 17 September including a flight opportunity for local Air Force Cadets.  I don't believe that anything specific has been organised for the general public.

Sincere thanks to local plane spotter Michael F for taking the time to capture and send through these great photos of what could possibly be one of nicer pair of aircraft to visit Gladstone Airport this year!

All photos taken by Michael Fleetwood  ©
Posted by Damian F at 10:29 PM