On Monday 26 September, Australian Army NH Industries MRH-90 Multi-Role Helicopter A40-031 was spotted on the ground at Mackay Airport.  It had flown South from its Townsville base. 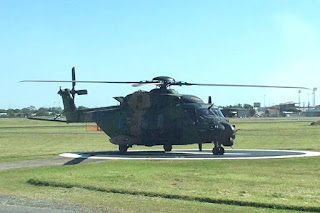 After taking on fuel, A40-031 then continued to Gladstone Airport and further South.  The MRH-90 was noted using the radio callsign of "Warhorse 31".