Certainly an interesting visitor to Gladstone Airport on Saturday 3 September was De Havilland DHC-2 Beaver Float Plane P2-HOR which is on delivery to The Hands of Rescue Foundation (THOR) charity organisation in Papua New Guinea (PNG).  It was noted arriving from Archerfield where it is believed to have been based for the last month or so (perhaps) being re-built since being imported into Australia. 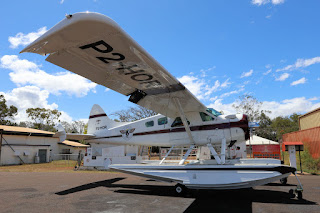 After spending the night, P2-HOR departed Gladstone Airport early on Sunday 4 September for Townsville and then Mareeba - where the FNQ Skies Blog captured the image above.  It was then noted continuing its journey North via Weipa.

The Hands Of Rescue Foundation (THOR) is a not for profit organisation registered in Papua New Guinea in 2011 and is based in Alotau, the capital of Milne Bay Province, in the south-east of PNG. The THOR Foundation’s focus is on achieving Safe Motherhood for women in PNG. In particular, their mission is to reduce Maternal Mortality throughout Milne Bay Province and the rest of PNG. 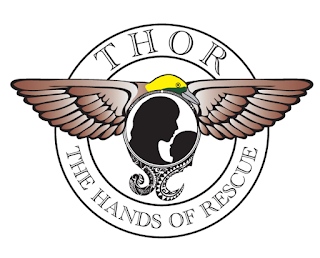 P2-HOR will be operated as a medical retrieval aircraft.  The DHC-2 Beaver is an amphibious aircraft, with extended range and many extra specifications to do the job of a Flying Doctor Service.

This plane is reportedly the ‘first of type’ in PNG.  The Beaver is iconic aircraft, and the most widely used float plane in the world.  It is also a rugged bush plane perfect for the type of work it is likely is carry out in PNG.  P2-HOR is also fully IFR equipped for instrument flying and it will carry eight people.  Besides being a Flying Doctor Service it will be able to perform many medically related functions.

To learn more about this valuable charity organisation in PNG, you can click onto their website:  http://www.thehandsofrescue.com.au/