On Monday 19 September, Royal Australian Air Force (RAAF) Canadair CL-600-2B16 Challenger 604 bizjet A37-003 was spotted on the ground at Rockhampton Airport.  It had earlier arrived from Emerald Airport. 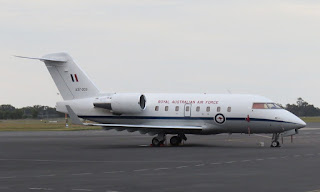 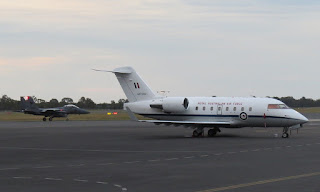 A37-003 was noted to be using the radio callsign of "Consort 25" and was believed to have brought acting Prime Minster Barnaby Joyce to town for some engagements.

UPDATE!  On Tuesday 20 September, A37-003, again as "Consort 25" departed Rockhampton Airport for Townsville.  It looked to fly from Townsville into Mackay Airport during the late afternoon.

Meanwhile, earlier on Monday 19 September, RAA) Boeing B737-7ES / E-7A Wedgetail Airborne Early Warning & Control (AEW&C) aircraft - A30-003 - was noted flying north as "Mitchell 01" and was intending to complete airwork at Rockhampton. However due to traffic, it turned back towards Gladstone and instead completed at least one missed approach at Bundaberg Airport.  A30-003 then returned to the south.