Local plane spotters Michael F, and Jamie C and Tash C captured the drama at Gladstone Airport late on Wednesday 2 October as QantasLink Dash-8-Q400 VH-QOH – operating as QLK2307 to Brisbane – turned down the closed main taxiway and couldn't get out! 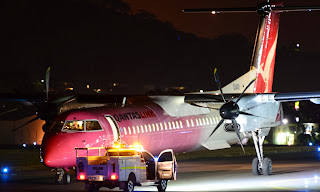 As we've posted this week, Gladstone was playing host to a pair of Bechtel Dassault Falcon 900EX bizjets, N970SF and N980SF, which were parked on the taxiway during their stay in the port city.

Eventually, VH-QOH shut its engines down, and the passengers were off-loaded onto fellow Dash-8-Q400 VH-QOC which eventually flew the last leg of the QLK2307 service from Cairns to Brisbane - via Townsville, Mackay, Rockhampton and Gladstone. 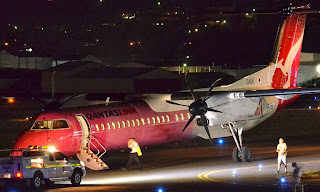 Meanwhile, VH-QOH sat on the taxiway for the night, and then early on Thursday 3 October, in a sight rarely seen, VH-QOH reversed up the taxiway under its own power until it got to a position where it could taxi back to a parking bay on the Gladstone Airport apron. 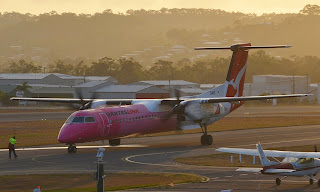 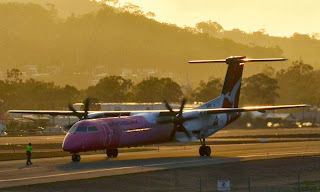 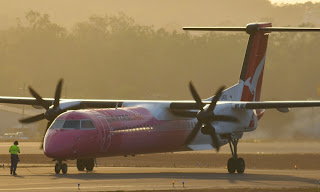 VH-QOH eventually departed Gladstone as QLK2331 to Brisbane without any more problems.

Thanks Michael, Jamie and Tash for sending through their great photos from Gladstone Airport!