Local plane spotters Jamie and Tash have sent through some of their fantastic photos from a very busy and crowded Gladstone Airport over the last few days. 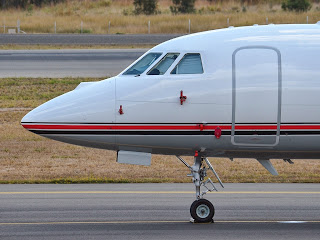 Later, with storms in the area on Sunday evening, Virgin Australia E-190 VH-ZPD was reportedly struck by lightening and possibly sustained damage as it approached Gladstone as VOZ1717 on Sunday 29 September.

Consequently, it didn't depart, and was photographed parked at the back of the Gladstone Airport apron on Monday 30 September receiving significant amounts of close attention from Virgin engineers pretty much throughout the whole day. 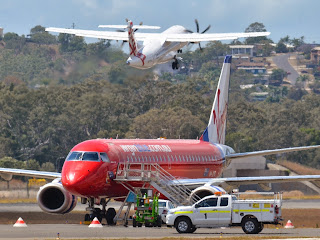 VH-ZPD eventually departed to Brisbane early on Tuesday 1 October as VOZ9500.  It seems to have not sustained too much damage as it then immediately operated a scheduled Virgin service out of Brisbane on Tuesday morning.

But by far the highlight on Sunday 29 September, and as we posted below, was the arrival of a pair of Bechtel Dassault Falcon 900EX bizjets into Gladstone from Brisbane.  N970SF was first to arrive, and was parked on the main taxiway at the Airport. 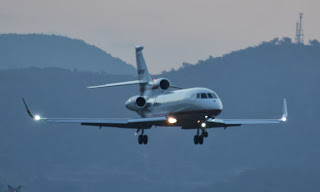 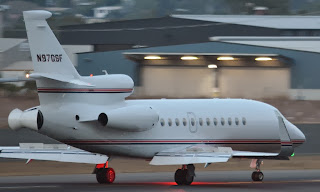 N980SF arrived a little later, and was parked behind its sistership, again on the taxiway.

With Gladstone Airport apron full with overnighting aircraft and the broken down Virgin E-190 VH-ZPD all parked, it was the net logical option to parked the Falcons on the taxiway.  Both Falcons remained parked in these spots throughout Monday 30 September, when Jamie and Tash captured some more great images of these fantastic visitors.

And at the time of writing, they are still reportedly locked up and not looking like going anywhere soon!

My thanks to Jaime and Tash for sending through these magnificent photos!