As we posted during the week, Virgin Australia Embraer E-190 VH-ZPD arrived into Gladstone Airport late on Sunday 29 September operating a scheduled service from Brisbane as VOZ1717.

VH-ZPD was reportedly struck by lightning from nearby storms and thus didn't depart Sunday night.  During Monday 30 September, Virgin engineers were in Gladstone to cast a very close eye over the aircraft for any suspected damage that may have occurred. 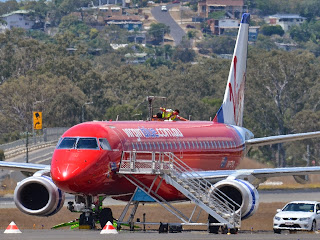 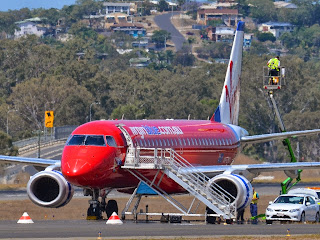 Eventually, after being parked for all of Monday, VH-ZPD departed back to Brisbane early on Tuesday 1 October as VOZ9500.  VH-ZPD re-entered service for Virgin shortly after, departing Brisbane later for Cairns as VOZ783.

Thanks to local plane spotters Jamie C and Tash C for sending through their great photos from Gladstone Airport!