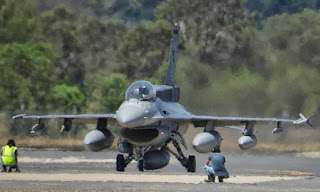 The flight of six fighter jets - of 140 Squadron of the RSAF - all touched down in quick succession following their flight from RAAF Base Tindal in the Northern Territory.  They were heard to be using the one radio callsign of "Singa 3311".

The six F-16s spotted arriving into Rocky to participate in the Singapore Armed Force's Exercise Wallaby 2013 were:

We sincerely thank Travis and Kayanne for sending through their awesome photos of some fantastic arrivals into Rocky today.  No doubt there will be ample more opportunities for locals to capture a glimpse of these magnificent aircraft - you certainly won't miss the noise they make when they depart!