Local plane spotters Jamie C and Tash C have sent through some wonderful images of some fantastic helicopter action at Gladstone Airport recently. 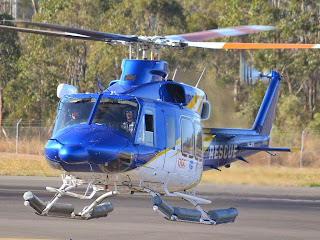 On Thursday 17 October, they captured some great photos of the locally-based Careflight Bell 412EP VH-XCY as it departed and then later returned to Gladstone Airport.

Also on Thursday 17 October, Australian Helicopters Agusta AB412 (Bell 412) VH-LSV popped into Gladstone Airport briefly on what seemed to be a ferry flight to North Queensland.

It arrived shortly after VH-XCY departed! 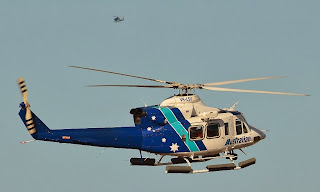 And VH-LSV departed Gladstone shortly after VH-XCY had arrived back at base!

Then on Sunday 20 October, fellow Australian Helicopters Bell 412EP VH-VAU was noted ferrying South through Gladstone Airport, touching down to take on fuel before departing to further points South.

Information suggests that VH-VAU had been operating in North Queensland as a Rescue Helicopter under the radio callsign "Rescue 700".  It is obvious that VH-LSV was ferried North to replace VH-VAU in this role.

Thanks to Jamie and Tash for sending through these great photos of these lovely big bell helicopters!