Some great local and overseas aircraft and helicopters have passed through various Central Queensland airports this week, however perhaps the most exotic was the big Brunei Shell Petroleum Sikorsky S-92A helicopter V8-SHL.


It was planned to land at Longreach on Friday 4 October, however it seems that it bypassed there for Roma.  It was spotted at Toowoomba (as shown above) and eventually landed at the Helitek Helipad on the Brisbane River at Pinkenba, where it is expected to undergo maintenance.

Over the previous weekend, Australian Helicopters Agusta AB412 (Bell 412) VH-LSV did land at Longreach on Saturday 28 September.  On Sunday 29 September, it flew on to Emerald, Rockhampton, Bundaberg, and Maryborough.  It eventually ended it's journey from Darwin at the Sunshine Coast Airport at Maroochydore.


This globe-trotting ultralight had been based in Noumea for some time, and was noted departing there for Australia late last week.

And, Cessna Aircraft demo aircraft Cessna 208EX Grand Caravan N506EX departed Longreach for the Sunshine Coast on Sunday 6 October.  It had arrived on Saturday 5 October from Mount Isa and Darwin.

Lastly, one local beauty in the form of 1959-build De-Havilland Canada DHC-2/A1 Beaver VH-AAX, ferried from its Innisfail home to Wilton Airfield in New South Wales via Mackay, Roma and Moree on Sunday 6 October. 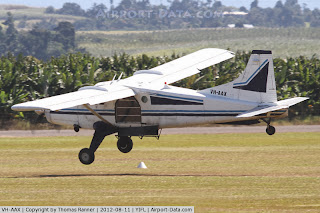 The beautiful old Beaver is currently utilised as a parachuting plane, and often ferries between Innisfail in North Queensland and Wilton Airfield.
Posted by Damian F at 12:16 PM