A couple of busy days at Emerald Airport over the course of Sunday 20 October and Monday 21 October with the arrival and departure of two of the Queensland Government (State of Queensland) Airwing aircraft, along with the Queensland Police Service (Airwing) Cessna 560 Citation Ultra bizjet VH-PSU, and other aircraft, bringing Ministers and support staff for a Community Cabinet meeting. 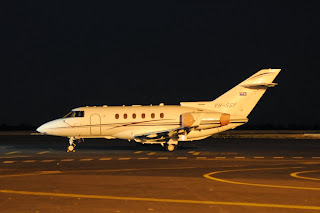 Followed by the arrival of Citation VH-PSU from Bundaberg. 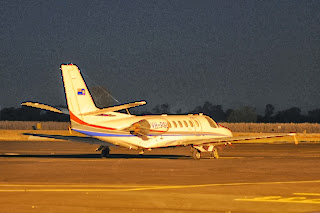 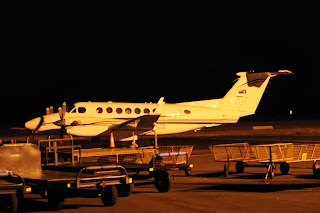 I captured these three aircraft late on Sunday as I drove back from Rockhampton after a busy weekend of cricket!

With the Community Cabinet meetings done, all three aircraft departed to Cairns over the course of Monday 21 October.

Other interesting visitors into Emerald over Sunday and Monday included Hinterland Aviation Cessna 208 VH-HLL, which arrived from Ingham and Cairns, and later departed back to Cairns as HND430 on Sunday 20 October.  Pilatus PC-12/45 VH-PID of Pinnacle Drilling in Orange in New South Wales, also called into Emerald on Sunday, touching down from Charters Towers and later departing to Dubbo.  VH-PID had a busy day's flying, starting in Dubbo and flying to Orange, the Sunshine Coast, before heading to Charters Towers.
Posted by Damian F at 8:45 PM