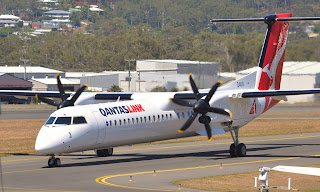 As mentioned in a Blog post below, QantasLink's latest Dash-8-Q400 Next Gen VH-LQM has recently entered service - and it has visited various Central Queensland Airports over the last few days.  Jamie C has sent through some photos of VH-LQM as it made its first visit to Gladstone Airport on Monday 21 October.

For information, the Bombardier Dash-8-Q400 Next Gen version is essentially a Q400 but with updated cabins, lighting, windows, overhead bins, landing gear, as well as reduced fuel and maintenance costs. 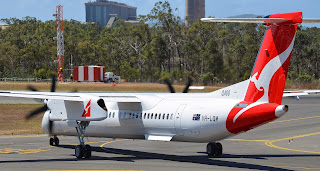 Other recent interesting visitors to Gladstone Airport that have been caught by Jamie C and Tash C have included Skytrans Airlines Dash-8-300 VH-QQP which was photographed departing the industrial city on Saturday 19 October operating presumably a Fly-in Fly-out (FIFO) charter flight as SKP1031.  It had arrived the previous evening as SKP1030.

The Surveillance Australia / Australian Customs and Border Protection Service Dash-8-200 VH-ZZJ has continued to operate this week out of Gladstone Airport, with it also spotted early on Friday 18 October departing for parts unknown.

Finally, a nice pair of Mooneys have been spotted passing through Gladstone Airport.  Cairns-based Mooney M20J VH-CVB was spotted arriving into Gladstone from Cairns on Tuesday 22 October.

A few great recent movements at Gladstone Airport captured by Jamie and Tash - and we sincerely thank them for taking the time to send these great images through during such a busy period of the month!