It's been a little bit quieter at Gladstone Airport this week, although late on Tuesday 8 October, Our Airline / Air Nauru Boeing B737-300 VH-INU called in very briefly operating what was believed to be a fly-in fly-out (FIFO) charter flight.

VH-INU touched down just after 6pm from Brisbane as RON914.

After only about 30 minutes on the ground, it departed back to Brisbane as RON915.

Meanwhile, last Friday 4 October, another interesting helicopter in the form of Professional Helicopter Services Robinson R-44 VH-HAI.  The chopper certainly looked interesting with its skid floats deployed, and what was more interesting is that it wears 'Lizard Island' titles, suggesting that it has taken residence in North Queensland flying transfer to the Great Barrier Reef resort island. 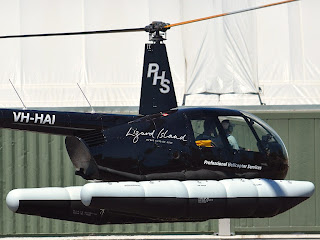 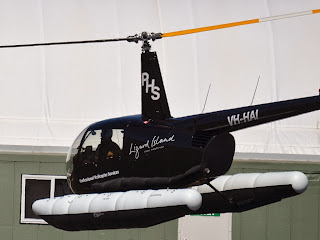 Thanks to local plane spotters Jamie C and Tash C for keeping us up-to-date with all interesting movements to pop into Gladstone!  Your help and support are much appreciated!