After visiting Proserpine / Whitsunday Coast Airport the previous week, Alliance Airlines Fokker 50 VH-FKX was again noted arriving into Proserpine Airport as UTY4427 from Townsville on Monday 27 June.  Flight tracking websites suggest that it rook the 'scenic route' to Prosie, flying over the Great Barrier Reef and Hamilton Island.  It remained on the ground during Tuesday 28 June when it was photographed below. 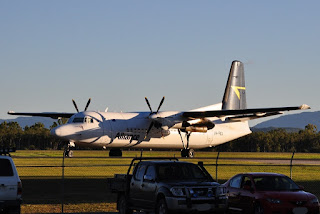 As we mentioned last week, VH-FKX appears to be operating an outback and Great Barrier Reef tour from Adelaide which included a visit to the 'red centre' of Australia at Ayres Rock, as well as Longreach, and as far North as Cairns over the last weekend.