On Friday 10 June, Queensland Government (QGAir) Rescue (State of Queensland) Agusta AW139 helicopter VH-ESH ferried South from Cairns to Archerfield via Mackay and Gladstone Airports.  It was spotted at Mackay Airport shortly after arriving on one of their two helipads located nearby to the Mackay Airport terminal. 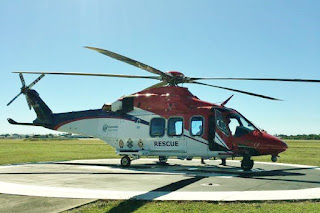 I presume that the QGAir Rescue helicopter - which has been operating out of Cairns Airport as "Rescue 510" has ferried South as a part of their maintenance 'rotational system' which is reportedly designed to ensure the even distribution of flying hours on each of their helicopters, thus avoiding the need to have multiple helicopters offline for simultaneous scheduled maintenance.