The severe weather that affected pretty much all of Queensland on Sunday 19 June caused several disruptions to scheduled services into into Hamilton Island Airport.  All three Virgin Australia flights to Hamo - from Melbourne (Tullamarine), Sydney and Brisbane - were completely cancelled while both Qantas Airways Boeing B737-800 services to Hamo from Tullamarine and Sydney were forced to divert after being unable to land at the Great Barrier Reef Airport.

VH-XZG operating as QFA866 from Sydney diverted directly to Cairns - where it is pictured below.  It later returned to Hamo and then operated as the delayed QFA867 back to Sydney. 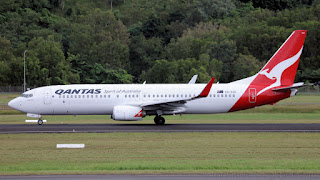 While VH-XZC operating as QFA870 from Melbourne (Tullamarine) diverted directly to Townsville.  It too later returned to Hamo and then operated as the delayed QFA871 back to Melbourne.

Meanwhile, arriving amidst all the weather on Sunday 19 June was Business Aviation Solutions Cessna 650 Citation VII bizjet VH-DHN.  It arrived from its Gold Coast base and looked to be staying for the night.

Photos taken by the FNQ Skies Blog  ©
Posted by Damian F at 8:08 PM