In the second of two posts about politician movements in CQ on Wednesday 15 June, Federal National Party leader and Deputy Prime Minister Barnaby Joyce visited the region once again calling into Gladstone, Rockhampton and Mackay Airports during a busy day on the hustings. 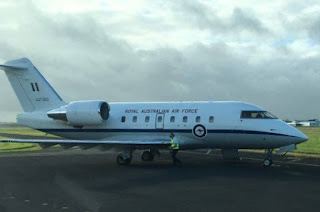 He was noted to be travelling in Royal Australian Air Force (RAAF) Canadair CL-600-2B16 Challenger 604 bizjet A37-003 which was spotted at Mackay Airport shortly after arriving from Rocky.

The Challenger was heard using the radio callsign of "Envoy 32" and looked to commence its day in regional New South Wales.

It appears that A37-003 was staying for the night at Mackay Airport.