Noted arriving into Emerald Airport on Wednesday 22 June was Royal Australian Air Force (RAAF) Canadair CL-600-2B16 Challenger 604 bizjet A37-003 of the VIP 34 Squadron.  It touched down from Melbourne as "Envoy 66" and appeared to bring politicians to Emerald while on the campaign trail for the upcoming Federal election. 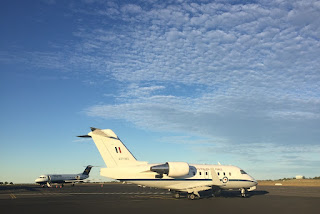 After sitting on the Emerald Airport apron for most of the day, A37-003 departed to Townsville shortly after the sun went down.