On Tuesday 14 June, Royal Australian Air Force (RAAF) Canadair CL-600-2B16 Challenger 604 bizjet A37-002 called into Rockhampton Airport from Sydney as "Envoy 27".  After only 30 minutes or so on the ground, it departed to Canberra.


It's visit is clearly associated with the Federal election campaign as two Federal Government ministers have been noted completing engagements around the beef capital. 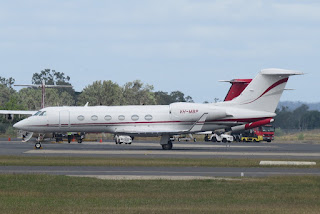 After spending all day parked on the Rocky Airport apron (as shown above) VH-MBP departed to RAAF Base Richmond as "Envoy 49" during the afternoon on Tuesday 14 June.

Thanks to local plane spotter 'IAD' for taking the time to capture and send through a great photo of VH-MBP.