Rather timely after our post below about the Singapore Armed Force's Exercise Wallaby 2016, with reports that a flight of three Republic of Singapore Air Force (RSAF) Aerospatiale / Eurocopter AS332M Super Puma helicopters were heard (and possibly) seen flying around the Fraser Coast region including Maryborough on Tuesday 21 June. 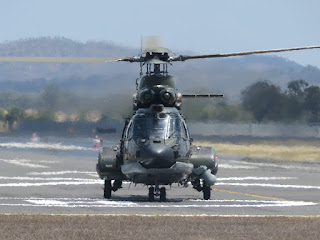 They were heard on local radio flying in formation using the callsign "Diamond".  It is believed all three choppers later returned to the Oakey Army Aviation Centre where a detachment of RSAF Super Puma helicopters are based.