While at Mackay Airport this week I was fortunate enough to spot a nice trio locally based corporate bizjets. 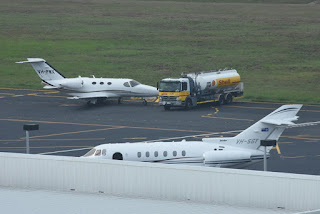 On Thursday 19 October, the Queensland Government Airwing (State of Queensland) Raytheon Hawker 850XP Bizjet VH-SGY visited for part of the day arriving from and later departing back to Brisbane. 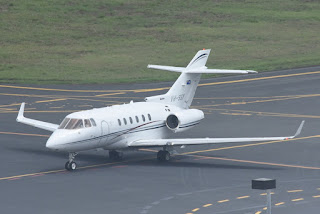 Of interest, VH-SGY also called into Gladstone Airport this week, arriving from Brisbane on Tuesday 17 October and departing back there on Wednesday 18 October. 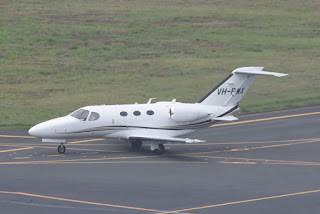 And the locally-Airport based Embraer EMB-550 Legacy 500 bizjet N142GZ was spotted departing Mackay Airport for Brisbane also on Thursday 19 October. 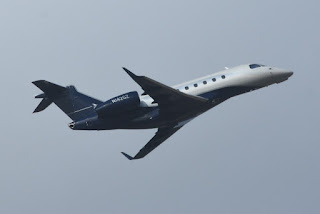 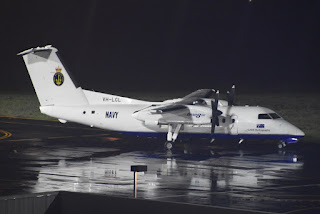 The heavily modified Dash-8-200 is usually based at Cairns Airport with Cobham Aviation but has reportedly come South to operate flights off the coast of Mackay for around three weeks.  It uses the flight number and radio callsign "Navy Survey". 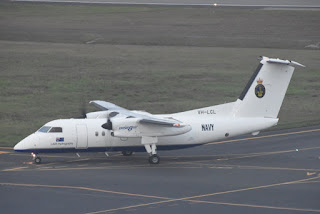 VH-LCL is operated by Surveillance Australia for Fugro LADS Corporation on a multi-year lease to the Royal Australia Navy LADS Hydrography Institute. The 'LADS' (Laser Airborne Depth Sounding) system is an aircraft based hydrographic surveying system that measures the difference between the sea surface and the sea floor as calculated from the aircraft's altitude to generate hydrographic data. After operating overseas since it was delivered in late 1997, VH-LCL commenced operations with the RAN LADS Hydrography Institute in late 2009.
Posted by Damian F at 10:17 PM