Queensland Premier Annastacia Palaszczuk called the State Election for November and immediately launched her campaign in Central Queensland and the Whitsundays calling into Proserpine (Whitsunday Coast) Airport on Sunday 29 October to hit the hustings at Airlie Beach. 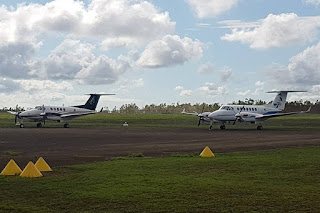 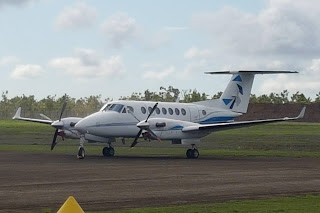 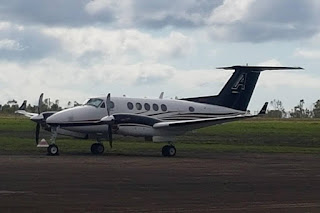 Bringing the Premier and her support staff, along with media to Prosie were Easternwell Group Beech B300 Super King Air VH-EWQ and Austrek Aviation Beech B200 Super King Air VH-ZGD which both looked to position from their Toowoomba base to Brisbane before flying North to Proserpine.

Of interest, VH-ZGD is a recent acquisition for Austrek Aviation with the Super King Air previous operating in Papua New Guinea (PNG) with South West Air as P2-SWZ.  As shown, it was a regular visitor to Cairns.

Joining them on the ground also at Proserpine later on Sunday 29 October was the Queensland Government (State of Queensland) Raytheon Hawker 850XP bizjet VH-SGY which also flew in from Brisbane.

Thanks to local plane spotter James K for taking the time to capture and send through these photos as he passed through Prosie early on Monday 30 October.

Photos taken by James Kirk and the FNQ Skies Blog  ©
Posted by Damian F at 8:22 PM