On Friday 20 October, Royal Australian Air Force (RAAF) Search and Rescue Sikorsky S-76A helicopter VH-LAH was spotted high above Bowen as it headed South from Townsville to RAAF Base Amberley.  It was also noted calling into both Mackay and Gladstone Airports where it is believed the Sikorsky took on fuel. 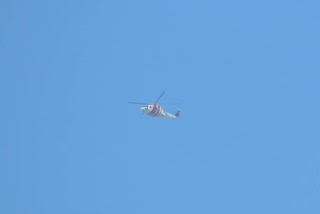 VH-LAH is owned by Lloyd Helicopters and operated by CHC Helicopters Australia, and is one of a number of choppers used for RAAF Search and Rescue missions. On this ferry flight, it was noted using radio callsign of "Choppa 42".

As mentioned, when it flew North through CQ at the start of October, it appears that "Choppa 42" has been in Townsville to provide support for RAAF F/A-18 Hornets from Number 3 Squadron and PC-9/A aircraft from Number 4 Squadron during the RAAF's Exercise Black Dagger which has just completed.


Exercise Black Dagger is a field training exercise that was held at RAAF Base Townsville and surrounding airspace.  The Exercise is the culmination of Number 60 Joint Terminal Attack Controller (JTAC) course designed to produce combat-ready JTAC-qualified personnel.

Meanwhile, fellow RAAF Search and Rescue Bell 412EP helicopter VH-VAA "Choppa 82" was noted calling into Rockhampton Airport for fuel on Monday 16 October.  It is presently based within the Shoalwater Bay Training Area (SWBTA) in support of the current Australian Army Exercise Diamond Run.

Photos taken by James Kirk and Leroy  ©
Posted by Damian F at 6:15 PM