On Sunday 22 October, a pair of Pacific Aerospace (PAC) 750XL aircraft wearing New Zealand registration markings of ZK-KDO and ZK-KEB both arrived into Longreach Airport in quick succession from the Gold Coast. 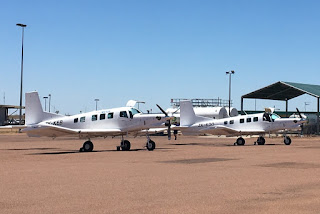 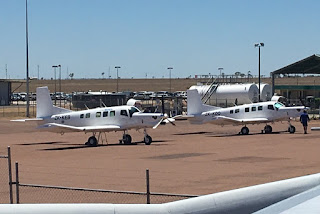 They had arrived on the Gold Coast from Hamilton in New Zealand via Lord Howe Island on Saturday 21 October.

Both of the New Zealand-built Pacific Aerospace (PAC) 750XL (XSTOL) ERW (extended range wing) aircraft continued from Longreach to Darwin where they are expected to stay for the night and depart to Sam Ratulangi International Airport (Manado International Airport) in Indonesia on Monday 23 October.

Of interest, another New Zealand-registered PAC 750XL, ZK-KDJ, has been parked idle at Darwin since arriving from Mount Isa in December 2016.

All photos taken by Calen Harvey  ©
Posted by Damian F at 7:57 PM