Over the course of this week, Holypeak Pty Ltd Canadair CL-600-2B16 Challenger 604 bizjet N360SL has looked to complete a 'tour' of Queensland and was noted visiting several Central Queensland Airports. 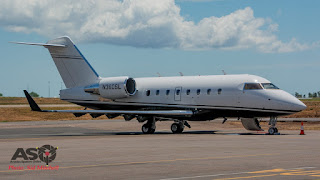 On Tuesday 24 October, N360SL was noted arriving into Mackay Airport from Townsville.  After spending the night, N360SL was then noted visiting Rockhampton, Gladstone, Bundaberg and Hervey Bay (Fraser Coast) Airports during a busy day of flying on Wednesday 25 October.  And at the time of writing, it appears to be flying towards Sydney from Hervey Bay.

Of interest, N360SL was spotted at Darwin Airport (pictured above) on Monday 23 October.

As well as the Challenger, there has been a few other local corporate bizjets that have been noted visiting Central Queensland Airports over the last couple of days.

Also on Wednesday 25 October, the Queensland Government (State of Queensland) Raytheon Hawker 850XP bizjet VH-SGY was noted making an early morning visit to Bundaberg Airport from Brisbane.  And while not quite a bizjet, Bontrail (Strahman Farms) Cessna 208 Caravan VH-SJJ was also noted departing Bundy also on Wednesday 25 October heading to Archerfield and Toowoomba.  It had arrived into Bundaberg Airport from these places the previous day.

Noted completing airwork at Gladstone Airport also on Wednesday 25 October was the Queensland Police Service (Airwing) Cessna 560 Citation Ultra bizjet VH-PSU which also flew up from Brisbane but via the Sunshine Coast.

Up the road at Proserpine (Whitsunday Coast) Airport, on Monday 23 October, Jetstream Aviation (Emprja P/L) Cessna 550 Citation II bizjet VH-VDF was noted departing to the Sunshine Coast after earlier arriving from Coen.  It originally arrived into Prosie back on Friday 20 October from the Sunny Coast and had departed to Coen on Saturday 21 October.

And also over the course of the weekend, LifeFlight (Aeromed) LearJet 45 bizjet VH-VVI "Ambulance 451" was noted visiting parts of CQ.  Late on Friday 20 October, it visited Mackay Airport arriving from and later departing back to Brisbane.  Then in the wee small hours of Saturday 21 October, it was back in the air visiting Gladstone Airport from Brisbane.  VH-VVI then departed to Townsville.  And finally on Monday 23 October, it was noted flying into Longreach Airport from Townsville.  VH-VVI then returned to Townsville.