On Thursday 12 October, LifeFlight (Aeromed) LearJet 45 bizjet VH-VVI was spotted arriving into Bundaberg Airport from Brisbane.  It appears that VH-VVI may have been operating another training flight into rum city as it has done a couple times over the last couple of weeks. 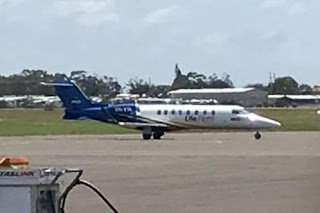 After taking off from Bundy, VH-VVI then completed a couple of circuits before it flew North to Townsville.

Of interest, it appears that VH-VVI was also due to fly into Mackay Airport on a med-evac flight as "Ambulance 451" in the wee small hours also on Thursday 12 October.  However around 30 minutes after departure from Brisbane it turned around and returned to Brisbane.


After staying for the night, both VH-EQU and VH-TAZ departed to Archerfield and further on Wednesday 11 October.