On Saturday 15 October, Graham Aviation (Cairns) Cessna 510 Citation Mustang bizjet VH-FNI was noted visiting Hamilton Island Airport.  It arrived from Mareeba where it appears to be based and is pictured below by the fantastic Far North Queensland Skies Blog. 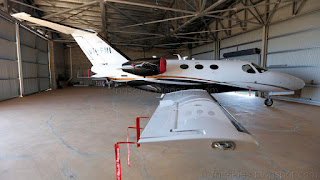 After a short while on the ground, VH-FNI departed Hamo for Cairns.

As we mentioned below when the Citation Mustang visited Hamo last month, VH-FNI has only recently been registered in the few weeks after was delivered to its new owner/operator at Bankstown in Sydney during the middle part of August.  It flew into Australia following a period of time operating in Wellington, New Zealand, as ZK-RJZ and prior to this it operated in New South Wales as VH-KJG.

Email ThisBlogThis!Share to TwitterShare to FacebookShare to Pinterest
Labels: Bizjet, Cessna, Hamilton Is