On Saturday 14 October, Papua New Guinea (PNG) based Tropicair Cessna 525B Citation CJ3 bizjet P2-MEH was spotted completing airwork in Central Queensland while on a massive day of flying which will see it start the day in Port Moresby (PNG) and finish at Bankstown. 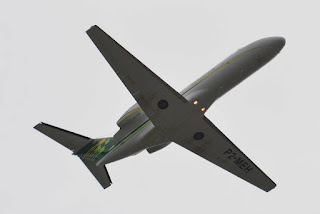 After calling into Cairns from Port Moresby, P2-MEH flew South and completed a practice ILS followed by a missed approach at Gladstone Airport.  Local plane spotter Michael F was at the right place at the right time and captured a couple of quick photos as the Citation climbed out after the missed approach. 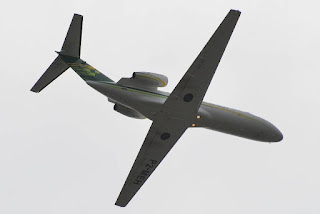 P2-MEH then continued towards the Fraser Coast and looked to complete more airwork, possibly including a missed approach, at Maryborough Airport.

From Maryborough, P2-MEH continued further South to the Sunshine Coast.  At the time of writing, it is continuing to complete airwork at Airport in New South Wales with its planned day of flying finishing in the early evening at Bankstown.

All photos taken by Michael Fleetwood  ©
Posted by Damian F at 3:40 PM