On Tuesday 17 October, Light Jets Australia Cessna 525 Citation CJ1 bizjet VH-TFW was back in CQ once again and was noted arriving into Biloela / Thangool Airport.  It touched down from its Archerfield base.


After spending the night, VH-TFW then continued to Rockhampton Airport on Wednesday 18 October.

After staying for the night, VH-TFW departed Rocky and returned to Archerfield early on Thursday 19 October.

Meanwhile, Vanderfield Pilatus PC-12/47 VH-WPH was also back in CQ this week and was spotted departing Rockhampton Airport on Wednesday 18 October for Emerald. 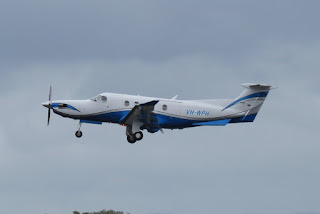 After departing its Toowoomba base on Sunday 15 October, during this busy week of flying, VH-WPH has also made multiple visits to Emerald, Roma, Saint George and Chinchilla Airports.