At Emerald Airport on Saturday 7 October, passengers on board QantasLink Dash-8-Q400 Next Gen VH-LQD operating the QLK2405 service bound for Brisbane, experienced a short delay to their departure, forced to wait at the threshold of Runway 06 as the driver of the Airport Safety Car attempted to scare off the many hawks and other birds that regularly congregate and take to the air near end of the Runway. 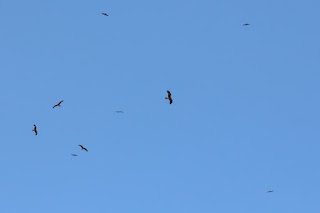 Just after take off, the pilot of the Dash-8 was heard to contact the Airside Safety Officer to check if there were any birds on the Runway as a result of a possible birdstrike.  Thankfully though, there were none and the birds that the pilots saw looked to pass just underneath the starboard (right) wing. 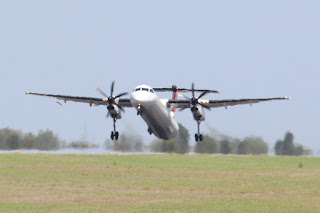 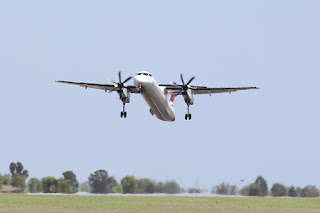 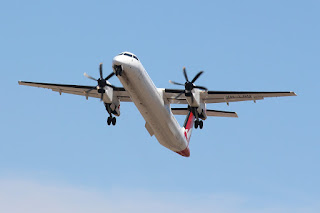 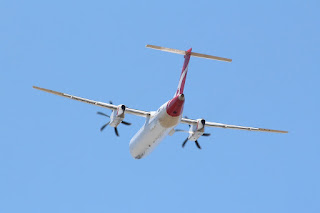 Local plane spotter Greg Weir was at the end of the Runway near Emerald Airport and managed to capture some photos as the birds certainly looked to come close to the wing of Dash-8. 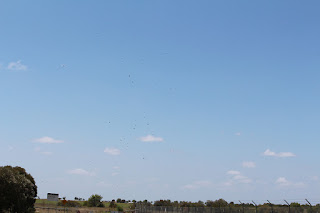 Just after take off from Emerald, large numbers of birds could be still seen near the end of the Runway circling as the Dash-8 turned South.

Of interest, data from the Australian Transport Safety Bureau (ATSB) shows that bird strikes are on the increase, so the job of the Airside Safety Officer has never been more important.

Report and photos contributed by Greg Weir  ©
Posted by Damian F at 7:49 PM