On Saturday 17 July, Australian Army Boeing CH-47F 'Foxtrot' Chinook helicopters A15-302 and A15-304 were spotted returning to Rockhampton Airport from the Shoalwater Bay Training Area (SWBTA). 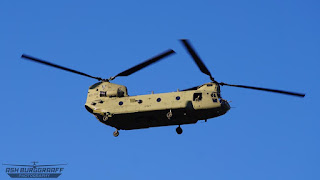 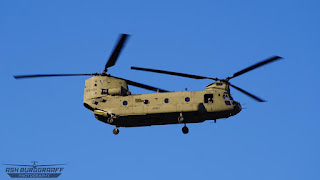 They were heard to be flying together as "Chainsaw".
It also appears that fellow Chinook A15-307 may have completed a flight as "Brahman 369".
While the visiting Australian Army Eurocopter (ARH) Tiger Armed Reconnaissance Helicopters continued to complete sorties to Shoalwater Bay and back.  It appeared that A38-004 and A38-006 flew as "Angry 22", while A38-011 looked to fly "Ghost 42" and then later as "Outlaw 11".
Finally, also on Saturday 17 July, Royal Australian Air Force (RAAF) Beech B350 Super King Air A32-675 was spotted arriving into Rockhampton Airport from Townsville. 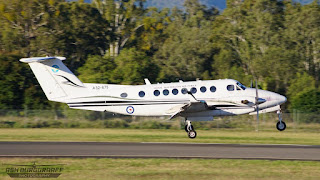 It later returned to Townsville and was heard to be flying as "Dingo 14".
Sincere thanks to local plane spotter Ash B for taking the time to capture and send throught these great photos!
All photos taken by Ash Burggraaff  ©
Posted by Damian F at 8:29 PM