Flying operations off the Queensland coast (and in particular the Fraser Coast) have seemed to ramp up this week, and on Tuesday 20 July, United States Marine Corps (USMC) Lockheed KC-130J Hercules 168075 (Tail Code QD-8075) was photographed as it overflew Rockhampton Airport while flying South from Townsville. 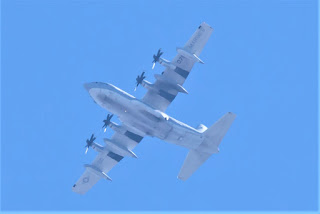 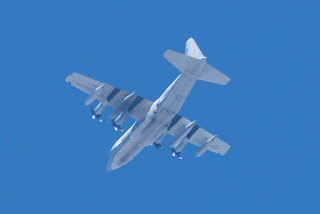 The Herc was noted to be flying as "Sumo 86".
The other US Marines KC-130J Hercules deployed to Townsville - 169227 (Tail Code QD-9227)  "Sumo 87" - appeared to also fly down to the Fraser Coast region and back to Townsville.
Also heard flying through the region, also on Tuesday 20 July, were US Marines Bell Boeing MV-22B Osprey tilt-rotor aircraft.  Some from Townsville were heard departing the Shoalwater Bay Training Area (SWBTA) as "Kingfisher 21", while it appears a single Osprey as "Magnum 31" flew off the USS America (LHA-6) amphibious assault ship of the United States Navy (USN) down to RAAF Base Amberley and back.
Finally, also on Tuesday 20 July, one notable aircraft of the Royal Australian Air Force (RAAF) to be noted flying of the Coast of Fraser Island was one of the last Lockheed AP-3C Orion aircraft A9-660 which flew up from and back to RAAF Base Edinburgh in South Australia.
Sincere thanks to local plane spotter Scott H for taking the time to capture and send through these great photos!
All photos taken by Scott Harris  ©️
Posted by Damian F at 9:33 PM