After dark on Wednesday 14 July, Pionair Australia British Aerospace BAe 146-200QC VH-SAZ was photographed soon after it arrived into Rockhampton Airport. It had flown in from Horn Island as 'SFZ643' / "Skyforce 643" having earlier flown up there from Cairns and after also having to return to Horn Island after its first departure after some 90 minutes in the air. 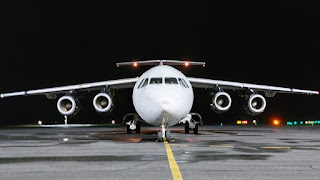 After a short time on the ground, VH-SAZ then departed Rockhampton Airport and flew to Brisbane but as 'SFZ9025' / "Skyforce 9025".

With school starting back up this week, it is believed that VH-SAZ operated the return part of the 'regular' school kids charter flight from/to Rocky.