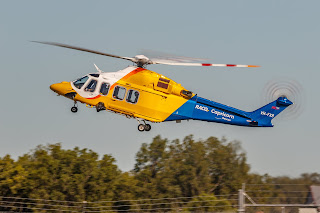 VH-YXR had ferried up from Redcliffe late on Thursday 1 July and has completed local flights out of and back to Rockhampton Airport in days since.
On Saturday 3 July, it became the 16th helicopter to land on the Rockhampton Base Hospital heli-pad.
Of interest, the AW139 chopper was imported to Australia and registered as VH-YXR late in 2020.  It previously operated as C-GLPI for the Canadian Ambulance Services STARS (Shock Trauma Air Rescue Society) Stars Aviation.
Also on Sunday 4 July, VH-YXR was photographed alongside fellow Babcock Mission Critical Services Australasia Agusta AB412 (Bell 412) VH-LSV which has also been completing local flights out of Rockhampton Airport and back in recent days. 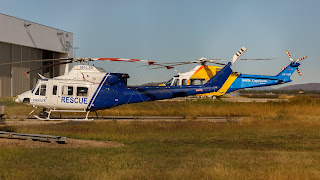 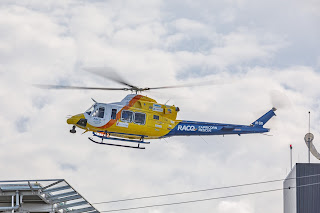 The AW139 is a nice addition to the Central Queensland aviation scene!
Sincere thanks to local photographer Steve V for allow us to share these great photos!
Photos taken by Steve Vit  ©
Posted by Damian F at 10:15 PM