On Sunday 25 July, United States Marine Corps (USMC) Lockheed KC-130J Hercules 168075 (Tail Code QD-8075) was photographed by me as it overflew Bowen Airport while flying South from Townsville to Proserpine (Whitsunday Coast) Airport. The Herc then departed down to RAAF Base Amberley before returning to Prosie and then Townsville during the late afternoon.  It was heard to be flying as "Sumo 86". 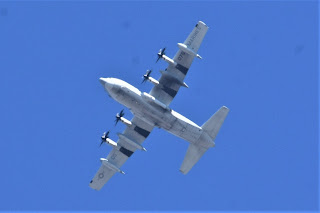 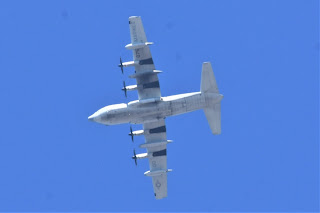 Meanwhile, also noted visiting Proserpine (Whitsunday Coast) Airport twice, also on Sunday 25 July, was Royal Australian Air Force (RAAF) Lockheed C-130J-30 Hercules transport aircraft A97-448 which also originally flew down from Townsville but as "Archer 02". It then also flew down to Amberley and then later returned to Prosie and then Townsville.

Finally, also on Sunday 25 July, United States Air Force (USAF) Lockheed MC-130J Commando II Hercules aircraft 10-5714 as "Hogan 23" and 14-5793 as "Hogan 24" were noted flying down from the North-West (possibly RAAF Base Tindal) and calling in once again to Bundaberg Airport.  They then departed for RAAF Base Amberley before heading North up to Proserpine (Whitsunday Coast) Airport where they appear to be staying for the night.
And again also on Sunday 25 July, a pair of unknown US Marines Bell Boeing MV-22B Osprey tilt-rotor aircraft as "Magnum 31" and "Magnum 32" were heard passing through the region flying between the USS America (LHA-6) amphibious assault ship of the United States Navy (USN) and RAAF Base Amberley and back. It was reported that the ship could be sailing in the vicinity of Hamilton Island in the Whitsundays.
Posted by Damian F at 10:15 PM