On Wednesday 28 July, Royal Australian Air Force (RAAF) Dassault Falcon 7X bizjet A56-001 was photographed soon after arriving into Bundaberg Airport.  It was flying as "Envoy 27" and touched down directly from Canberra. 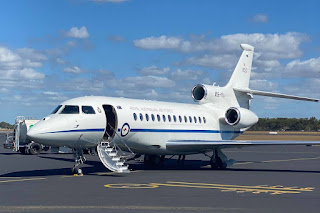 After around an hour on the ground, A56-001 departed Bundaberg Airport for Hamilton Island Airport.  It then departed Hamo for Cairns via a missed approach at Townsville.
UPDATE!  On Thursday 29 July, A56-001 "Envoy 27" was back in CQ, flying down from Cairns to land at Proserpine (Whitsunday Coast) Airport.  It was then heading to Emerald Airport but diverted to Rockhampton Airport whilst enroute.  From Rockhampton Airport, A56-001 then departed to the Gold Coast and back to Canberra.
As shown, A56-001 still wears additional decals to commemorate the RAAF's 100th anniversary.
Photo taken by Hayden Matthew Alexander  ©
Posted by Damian F at 10:18 PM