On Sunday 25 July, the Callide Dawson Flying Group (CDFG) held one of their many fly-aways - this time it was to Smoky Creek.  Here is a report:

The get-together at Smoky Creek went very well, with a good roll-up for smoko. 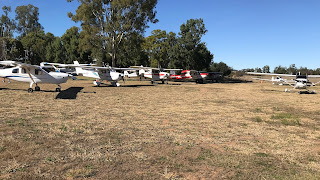 The CDFG extends its gratitude to Rob and Jodie Wilson for their permission to gather at Smoky Creek, to John Rasmussen and Alan Wilson for the effort they put in to make this happen and to everyone who took along something towards the smoko.

Dave See has provided a photo of the planes on the ground there plus this little story about his trip there and back home.

First thing Sunday morning.....checked NOTAMS.....it didn't look like a real good day with 21 knots predicted from SW at 12 o'clock. Despite that we decided to go as we would be there long before the wind came up. I say 'we' as Dave Jewell came with me in my LightWing. He was planning to fly his trike over there. But he needed to be home by 1 0'clock to move cattle etc and with the forecast it would have taken him all afternoon to get home.

We warmed up and were in the air by 7.15am. Dave Jewell flew as PIC. He is still waiting for the new engine, for his LightWing, to come from Bert Flood. It was the first time I have flown as co-pilot for ages and thoroughly enjoyed the view and the experience. It took 35 minutes to fly the 48nm. Touched down at Smoky just after 7.45am. We had almost 20kts on our tail all the way......that doesn't happen very often.

JR and Ray Wenck were there on the ground to greet us after a perfect landing by DJ. We soon had a very welcome mug of coffee in our hands (first for the day) and were joking that maybe we might be the only ones coming.

Next thing we heard the radio go off with an inbound call, then another one, then yet another and still more after that. The smile on JR's face said it all as it was sounding and looking just like the old days of Smoky Creek. We just know that Kev Wilson was watching it all unfold from above and would have been smiling too!

Eight aircraft flew in to join John Rasso's Aeronca Champion (LIA) and Len Neale's Karatoo. The 10 aircraft all parked together made for a really good sight (a picture of which I've included). The urn was on all morning along with an abundance of cakes and biscuits for all to enjoy along with no shortage of conversation.

Big thanks to Jodie and Rob Wilson for allowing our club to visit Smoky Creek once again.

All too soon it was time to fly home and as predicted NOTAM's was right! The wind came up around 10 o'clock and got pretty serious as the morning progressed. A couple of planes flew out and I watched their fancy movements on climbout through the turbulence.
It was gusty as one moment and then stop for a bit and then blow again. We said our goodbyes and flew out (with me as PIC and DJ as co-pilot). There sure was some movement in the air! However after an hour and 10 minutes with some patches of ground speed under 40kts we were back in circuit over Bauhinia Park. Did a straight in from the north with some fancy footwork on short final to get the LightWing settled down and tucked away in the hangar before 1pm.

It was a great morning, really great to see Allan and Fiona Hayward (who drove over for the morning) and good to catch up with Herb Wilson (Kev's brother) who was there as well.

For those of you who couldn't make it, you missed a terrific 'catch-up' morning and I hope you can make it along to our next social fly-away which we hope to have on the Dawson side of the Range on the 4th weekend in August..............Safe flying..........Dave See*
Posted by Damian F at 7:47 AM

Email ThisBlogThis!Share to TwitterShare to FacebookShare to Pinterest
Labels: CDFG