On Thursday 29 July, Alliance Airlines Fokker F-100 VH-FKC was spotted visiting Mackay Airport on what looked to be a closed charter flight from Brisbane and the Sunshine Coast. It arrived as UTY3384/6. 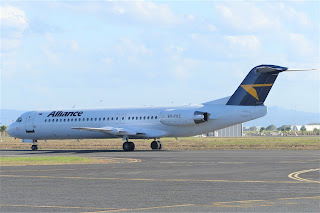 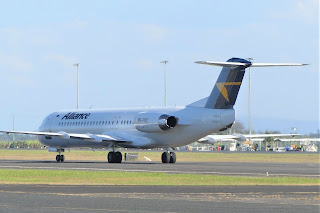 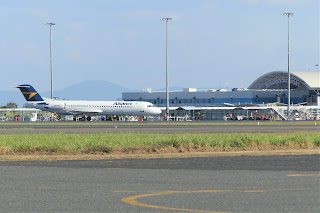 After dark, it was planned to return to the Sunshine Coast and Brisbane as UTY3387/9 with an arrival back in the Queensland capital in the early hours of Friday 30 July.
Of interest, VH-FKC has been operating out of the Alliance Airlines base at Perth Airport for some time and only flew back into to Brisbane in late May operating a Fly-in Fly-out (FIFO) charter flight from Perth to The Granites Gold Mine and then Brisbane as UTY382/372.
Meanwhile, also spotted visiting Mackay Airport, also on Thursday 29 July, was  Link Airways (Corporate Air / Vee H Aviation) SAAB 340B VH-VEO. 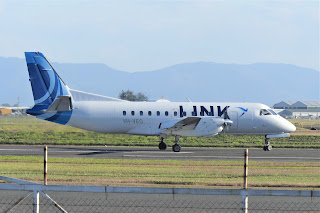 It too looked to be operating a closed charter flight and looked to arrive from Brisbane and the Gold Coast, before then also making an after-dark departure back to those places, also returning to Brisbane in the early hours of Friday 30 July.
All photos taken by 'JM'  ©
Posted by Damian F at 7:26 PM