During the course of Sunday 18 July, a pair of different Royal Australian Air Force (RAAF) Boeing C-17A Globemaster III Transport Aircraft were spotted visiting Rockhampton Airport, both in support of the joint military Exercise Talisman Sabre 2021 (TS21).
During the morning, C-17 A41-211 as "Stallion 45" was spotted arriving into Rockhampton Airport from Canberra. 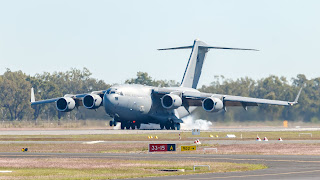 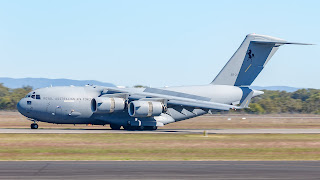 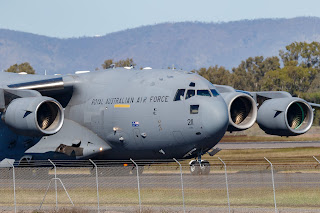 After offloading personnel and equipment, it then returned to Canberra before flying up to RAAF Base Amberley. 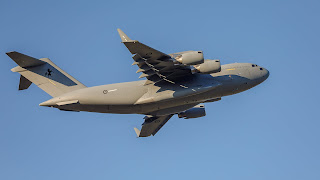 While during the late afternoon, A41-206 touched down at Rockhampton Airport from Amberley as "Thunder 01". 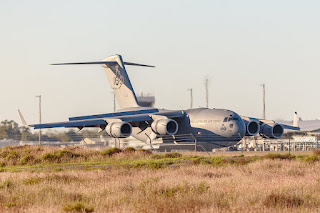 It then departed on dusk and headed North to Townsville before then returning to Amberley. 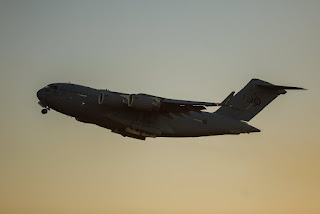 Meanwhile, also on Sunday 18 July, another RAAF C-17 Globemaster A41-212 "Stallion 26" looked to also fly up from Canberra to Rockhampton but was unable to land and instead spent time circling near the Airport for some time before it then flew down to Amberley.
Finally, also on Sunday 18 July, Royal Australian Air Force (RAAF) Alenia C-27J Spartan transport aircraft A34-008 "Wallaby 01" was photographed as it completed a missed approach also at Rockhampton Airport. 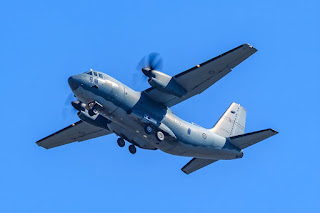 The Spartan looked to fly down from Townsville and then onwards to Amberley.
Fellow RAAF C-27J Spartan A34-001 "Wallaby 75" also over Rockhampton during the day, also appearing to fly from Townsville to Amberley.
And RAAF Beech Super King Air A32-675 was back at Rockhampton Airport, again visiting from Townsville, again as "Dingo 14".
Sincere thanks to local photographer Steve V for yet again allowing us to share these fantastic photos!
All photos taken by Steve Vit  ©️
Posted by Damian F at 9:34 PM