A great weekend has been had by me in the Whitsundays, and on Sunday 25 July, I ventured to the Whitsunday Airport at Shute Harbour to see the arrival once again of the often visiting American-registered Eclipse EA500 bizjet N257AK. 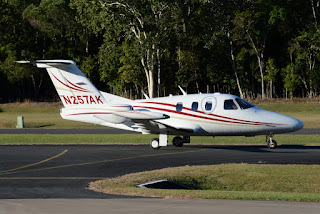 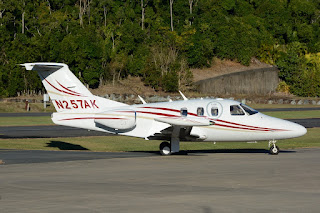 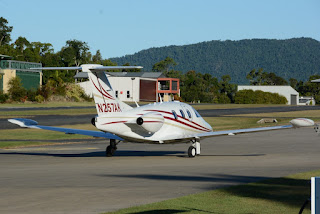 As per usual, it touched down from Archerfield.
UPDATE!  On Thursday 29 July, N257AK departed the Whitsunday Airport at Shute Harbour and returned to Archerfield.
Machjet (Machjet International) Cessna 525A Citation CJ2 bizjet VH-ZIY arrived into Hamilton Island Airport from the Sunshine Coast also on Sunday 25 July.  It then flew across to Ayres Rock and back to Hamo before it then returned to the Sunshine Coast.
And the locally-based Embraer EMB-550 Legacy 500 bizjet N142GZ was back in the air out of Mackay Airport, flying down to Brisbane and back.

Sunshine Coast-based Piper PA-34-200T Seneca VH-COE flew into Rockhampton and Charleville Airports from Caboolture on Saturday 24 July before then continuing to Emerald and Mackay Airports on Sunday 25 July.
And Jetstream Electrical (Darwin) Piper PA-30-160 Twin Comanche VH-NEE continued to fly around the region.  It departed Springsure and looked to be heading towards the Goonoo Feedlot near Comet.  Again, VH-NEE was heard using the radio callsign of "Sparky 424".
Finally, spotted by me at Bowen Airport on Sunday 25 July after they both arrived on Saturday 24 July were Pilatus PC-12/47 VH-DNG and Cessna 208 Caravan VH-WDE. 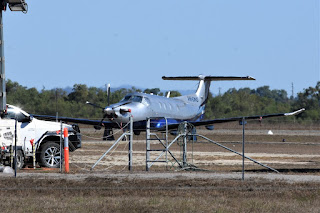 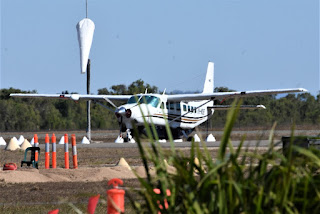 VH-DNG arrived from arrived from Mungindi / Dingadee, while VH-WDE arrived from Koarlo and Archerfield.  They remain parked.
UPDATE!  Both VH-DNG and VH-WDE departed Bowen Aerodrome on Saturday 31 July.
Posted by Damian F at 11:07 PM