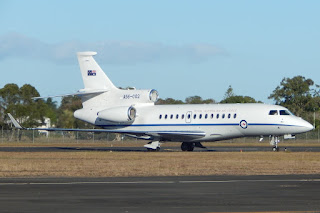 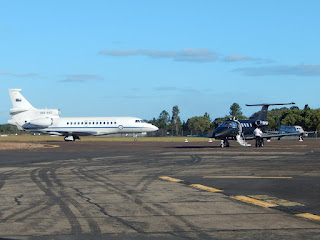 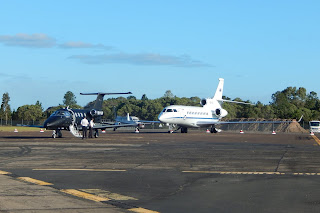 The Falcon 7X bizjet, which is flown by the RAAF's VIP 34 Squadron, looked to arrive from Canberra as "Envoy 46" and appears to be staying for at least the night.
UPDATE!  Early on Wednesday 28 July, A56-002 "Envoy 46" was noted departing Maryborough Airport for Brisbane and then Canberra.

Meanwhile, also spotted at Maryborough Airport, also on Tuesday 27 July, was Avcair Embraer 500 Phenom 100EV bizjet VH-NJR.  It looked to arrive from and then depart back to Brisbane.

Sincere thanks David G of Maryborough Aviation Services for taking the time to capture and send through these great photos!