Certainly an interesting sight on Tuesday 13 July, as one of the two remaining former New Zealand-based Jetstar Airways Dash-8-Q300 turboprops, VH-TQM, popped into Rockhampton Airport while flying up from Tamworth in New South Wales to Cairns.  It was noted flying as QLK712. 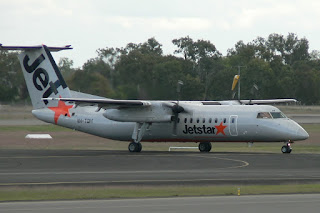 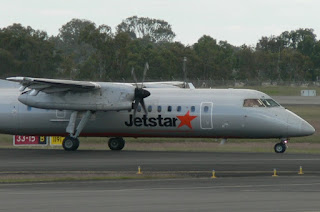 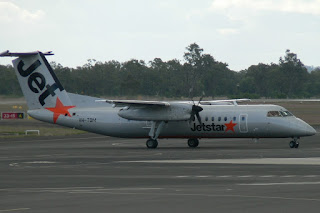 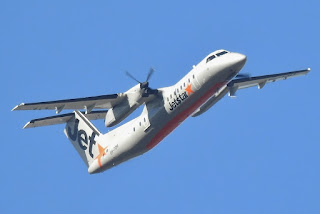 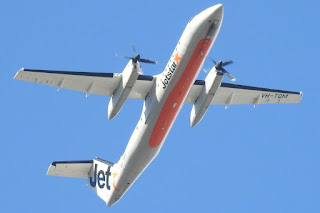 It is believed that the Dash-8-Q300 has flown North for planned maintenance after being in storage at Tamworth since arriving back in Australia in late 2019.

It is possible that VH-TQM could subsequently be re-painted and then re-enter service with Qantas / QantasLink.

In November 2019, Jetstar Airways ceased regional turboprop services in New Zealand due to ongoing losses and weak market conditions. The Qantas-owned low-cost carrier (LCC) began flying in New Zealand in December 2015 to cover a gap that was left in the Kiwi market following Air New Zealand's decision to withdrawn from a number of regional routes.

These services were operated by as many as five Dash-8-Q300 turboprops which were wet-leased from fellow Qantas Group subsidiary Eastern Australia Airlines (QantasLink) and connected Jetstar's Auckland base with Napier/Hastings, Palmerston North, New Plymouth, and Wellington via Nelson.

The five Dash-8-Q300s were individually ferried across the Tasman from Auckland via Norfolk Island to Brisbane in November and December 2019.

Three of the five Dash-8-Q300s were almost immediately re-painted and re-entered service with Qantas / QantasLink. VH-TQK 'Tathra', VH-TQD 'Mount Isa' and VH-SBI 'Echuca' re-entered service during December 2019 and January 2020 and since the downturn in domestic airline travel, have been stored and then now mostly operated in the Southern states.

The other two Dash-8-Q300s, VH-TQL and VH-TQM ferried to Tamworth in New South Wales for storage.
Sincere thanks to local plane spotters Don W and John L for taking the time to capture and send through these great photos!
Photos taken by Don Williams and John Lee  ©
Posted by Damian F at 9:55 PM