Certainly an interesting visitor to a couple of CQ Airports on Saturday 24 July was De Havilland DHC-2 Beaver Float Plane P2-HOR which popped into Proserpine (Whitsunday Coast) Airport and then Gladstone Airport. 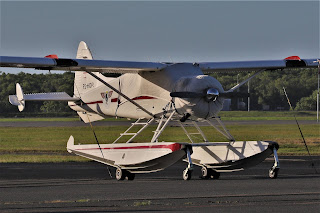 The Beaver is operated by The Hands of Rescue Foundation (THOR) charity organisation in Papua New Guinea (PNG).
It had arrived into Cairns back on Thursday 8 July after flying down from Port Moresby to Horn Island the previous day.  It is pictured above parked on the Cairns Airport General Aviation (GA) Apron.
I presume that P2-HOR has flown to Australia for planned maintenance, having been delivered to THOR in 2016 after the Beaver departed Archerfield for PNG also flying via Gladstone Airport.
UPDATE!  It appears that early on Sunday 25 July, P2-HOR continued further South to Gladstone Airport, presumably to Archerfield.
Photo taken by Jonathan Williams  ©
Posted by Damian F at 10:38 AM