For the second day running, there have been a few diversions from a rain soaked Hamilton Island Airport.  Local news reported that Hamo was inundated with as much as 70mm of rain in some 24-hours! 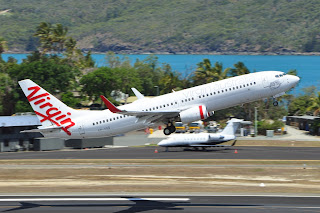 It appears that on Tuesday 10 June, more Virgin Australia flights, and also the morning QantasLink service from Cairns - were affected by some diversions.  Again, I believe that the following diversions and cancellations occurred - information based on web-based flight-tracking software:

Virgin Australia flight VOZ1281 SYD-HTI which was operated by B737-800 VH-BZG diverted and landed at Proserpine / Whitsunday Coast Airport after being unable to land at Hamo.  It appears that it tried to later re-position to Hamo, but looked to land at Prosie again.  Eventually, VH-BZG departed empty back to Sydney, positioning as VOZ9912.

Virgin Australia flight VOZ1751 MEL-HTI which was operated by B737-800 VH-VUT also diverted and landed at Proserpine / Whitsunday Coast Airport.  After some three hours on the ground, VH-VUT then completed the flight, finally landing at Hamo.  It then turned around and operated that now delayed VOZ1754 back to Melbourne (Tullamarine).

It was noted that scheduled the VOZ1497/1498 BNE-HTI-BNE - operated by B737-800 VH-YFR - arrived and departed Hamilton Island without delay.

Incidentally, it appears that all Jetstar Airways flights seemed to land and take off without major problems at Hamilton Island on again on Tuesday 10 June.
Posted by Damian F at 8:57 PM