While I haven't been able to get visual confirmation of its performance, a solo Royal Australian Air Force (RAAF) PC-9/A Roulette was heard to depart Proserpine / Whitsunday Coast Airport destined for Roma on Saturday 21 June. It was using the radio callsign of "Aladdin 72" which is unit callsign of Central Flying School (CFS) that the Roulettes are a part of based at RAAF Base East Sale in Victoria. 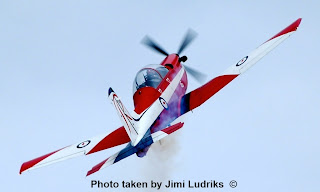 The Roulettes are the elite formation aerobatic display team of the Royal Australian Air Force (RAAF). Their primary role is to showcase the flying skills of the RAAF to the Australian public through aerobatic displays at major events and airshows.  The Roulettes currently fly Pilatus PC-9/A aircraft. These are two-seat single-engine (a Pratt and Whitney PT6A-62 turboprop with 950 shaft horsepower) aircraft, and are the major basic training aircraft of the Australian Defence Force (ADF).
Posted by Damian F at 12:39 PM