It's been interesting to note this week that a couple of aerial survey aircraft have been based at Gladstone Airport and then completed aerial survey flights over the flood-hit Rockhampton region.

Late on Thursday 6 April, Bayswater Road / Australian Aerial Mapping (AAM) Pilatus Britten-Norman BN2A-20 Islander VH-CWG was noted arriving into Gladstone Airport from the Gold Coast. It then completed a survey flight over Rockhampton on Friday 7 April before it then returned to the Gold Coast.


Also on Thursday 6 April, Royal Australian Air Force (RAAF) Beech B350 Super King Air A32-651 was noted completing an aerial survey flight as well as several missed approaches at Rockhampton Airport after flying South from Townsville.  It was photographed returning to Townsville a little later in the day.  It was noted flying as "Dingo 05". 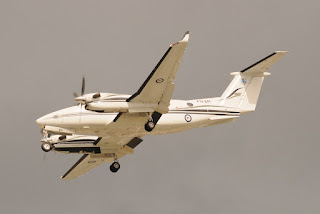 Finally, earlier in the week on Monday 3 April, normally New South Wales-based Cessna 210 VH-ZID was noted arriving into Gladstone Airport from Townsville.  It looked to complete at least two aerial survey flights on Tuesday 4 April before it too went to the Gold Coast on Wednesday 5 April.

Of interest, VH-ZID looked to be based at Mackay Airport last weekend on Saturday 1 April and also completed some aerial survey flights based out of Mackay Airport before flying North.