On Monday 3 April, LifeFlight Australia Bell 412 helicopter VH-XCO was spotted parked (ironically) outside the former LifeFlight hangar at Gladstone Airport after it had arrived from Archerfield and the Sunshine Coast.  It was heard to be using the radio callsign of "Rescue 599". 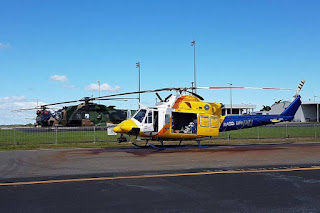 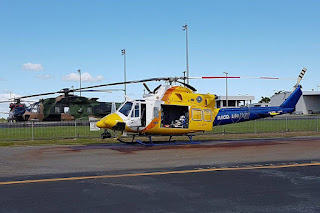 The LifeFlight helicopter has reportedly been deployed to Gladstone to operate for the next week in support of the relief efforts following the major flood event at Rockhampton this week.

And it was put straight to work, departing Gladstone for Emerald Airport before it completed a med-evac flight to Rockhampton Base Hospital.  VH-XCO eventually returned to Gladstone Airport.

Meanwhile, as mentioned below, the Royal Australian Navy (RAN) NH Industries MRH-90 Multi-Role Helicopters remained parked at Gladstone Airport.  However, two of the three - A40-006 and A40-026 - were spotted flying around both Rockhampton and Mackay on Monday 3 April.