A couple of interesting visits at Rockhampton Airport by Royal Australian Air Force (RAAF) Beech B350 Super King Air A32-351. 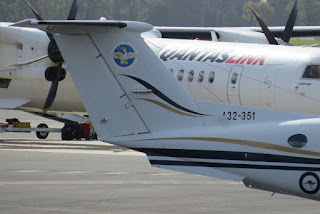 On Wednesday 19 April, A32-351 - flying as "Hudson 03" - touched down at Rocky from RAAF Base East Sale in Victoria.  It later departed to Canberra.

Then on Thursday 20 April, A32-351 - now flying as "Wisdom 04" - touched down at Rocky (as pictured) from Townsville after it had earlier flown there from Canberra via Parkes.

A32-351 departed Rocky again for Canberra.