Along with the Skytraders Pty Ltd Airbus A319-115(LR) VH-VHD "Snowbird 1" visiting, after dark at Gladstone Airport on Wednesday 12 April was a very busy time with multiple medical aircraft and helicopters touching down on various missions.  There was also the rare visit to Gladstone Airport of an Alliance Airlines Fokker F-100 VH-UQW, which seemed to operate a flight on behalf of Virgin Australia as UTY2600/2601 flying from and back to Brisbane.

Of the medical arrivals, LifeFlight (Aeromed) LearJet 45 bizjet VH-VVI "Ambulance 451" arrived into Gladstone Airport late on Wednesday 12 April from Longreach having earlier departed from Brisbane.  After over an hour on the ground, VH-VVI returned to Brisbane.

As has been occurring several times each day, with Rockhampton Airport closed, the Rocky-based Capricorn Helicopter Rescue Service Bell 412 helicopters VH-VAU "Rescue 300" and VH-LSY "Rescue 310" were both noted completing flights from Rockhampton Base Hospital to Gladstone Airport late on Wednesday 12 April.  VH-LSY is pictured below on completing a similar flight into Gladstone Airport on Sunday 9 April.

These flights from the CHRS seemed to coincide with the visit to Gladstone Airport also late on Wednesday 12 April of a pair of Royal Flying Doctor Service (RFDS) King Air turboprops.  Hawker Beechcraft B200 VH-FDM "FlyDoc478" arrived from Barcaldine and departed to Bundaberg, while Hawker Beechcraft B200 VH-FDI "FlyDoc 467" arrived from and later departed back to Brisbane.

As we've mentioned below, there has also been a wide variety of other helicopters and fixed-wing aircraft to call into Gladstone Airport over the last few days - some of the busiest days the Airport has seen! 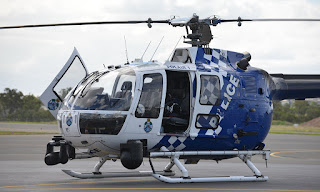 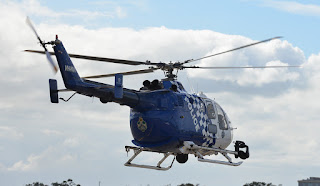 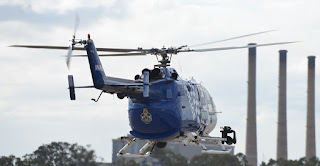 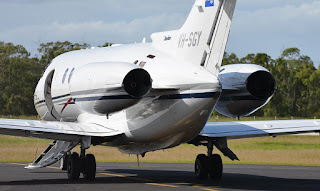 As we mentioned on our Facebook page, the Rockhampton Aero Club positioned six of their aircraft to Hedlow Airfied to North-West of Rockhampton.

Sincere thanks to local plane spotter Michael F for taking the time to capture and send through these great photos from the last few days!

All photos taken by Michael Fleetwood  ©
Posted by Damian F at 12:19 PM