On Sunday 9 April, Surveillance Australia / Australian Border Force (ABF) Cobham Aviation-operated Dash-8-202 VH-ZZA "Borderforce 11" declared a "PAN" and made an emergency landing at Hamilton Island Airport.  The crew reported that there was an 'electrical smoke' type smell that had entered the cabin. 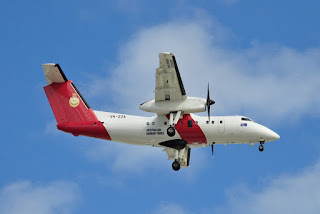 After landing safely, the local aviation rescue and fire fighting (ARFF) services crews were on hand to escort the Dash-8 to a parking gate.

Of interest, on Friday 7 April, VH-ZZA also declared a "PAN" and was forced to make an emergency landing at Townsville Airport with exactly the same report of an 'electrical smoke' type smell that had entered the cabin.  I was lucky enough to be at the right place at the right time and was able to capture a photo of the Dash-8 on short finals to Runway 01 at Townsville (above).

VH-ZZA is one of several Dash-8 turbo-props that continue to operate Customs and immigration surveillance flights up and down the Queensland coast out of various Airports.
Posted by Damian F at 5:47 PM